After four decades of skyrocketing growth since 1980’s, foreign trade came out of 2019 with uncertainties. However, experts commonly believe that these uncertainties will be eliminated by 2020 with upsurging growth figures on the horizon.

The World Trade Organization has set its growth forecast for 2020 at 3 percent. While increasing trade tensions and a decelerating global economy prompt analysts to remain conservative in their forecasts, there is also an optimistic atmosphere.

A better performance is expected in global trade in 2020 due to normalized trade relations. The worst-case scenario for 2020 estimates a 1.7 percent growth in trade while in the best scenario it is expected to increase by 3.7 percent.

Updated trade forecasts mostly rely on the estimated 2.3 percent global growth. The expected economic slowdown arising from factors such as trade wars and the Brexit ambiguity also have a role in lowered trade estimations. However, the engine of growth will still be developing countries and the recently recovering Europe while the US is also expected to continue growing steadily despite minor declines.

The prevailing opinion is that simultaneous easing of trade tensions and monetary policies would play a key role in 2020. A slowdown in China's growth is considered to be certain, but the overall growth forecast is still high at 6 percent. With positive expectations on the US-China trade war climbing up, it has become possible to speak more optimistically for China and the Far East in general.

Such developments in the West and the East also leads to further optimistic forecasts for Turkey, which enjoys the strategic advantage of being in close proximity to both sides of the world. Indeed, many institutions including the IMF and the OECD revised their growth forecasts for Turkey upward for 2020.

The prospect of China taking over the helm of global economy, which is the main reason for the US-Chinese trade wars, remains strong. Although China's rise has slowed down, it will continue to lead growth in world economy, especially with the Modern Silk Road Project, the One Belt One Road initiative and its increasing welfare over the past 30 years. The investments made for the One Belt One Road Project, where Turkey is part of the Middle Corridor, indicate a potential increase in resources from China. The Middle Corridor, which is the fastest route for cargo trains travelling from China to Europe, passes through Turkey. At least 300 hundred One Belt One Road trains are expected to go to Europe via Turkey next year. The first one of these trains, which set off from China’s Xinjiang Uyghur Autonomous Region, arrived in Mersin in 15 days.

Growth forecasts for Europe are more positive thanks to the fact that the continent is now out of recession and the expectation that there will be no “no-deal” Brexit. The Grand Old Continent will further relieve once the Brexit ambiguity is resolved in 2020. The increase in salaries and income, on the other hand, is the biggest source of optimism. Salaries continue to rise in both G20 and developing countries compared to the previous year. This demand hike in Europe will be reflected in export figures and new investments in Turkey since European countries account for 47.3 percent of the country’s exports.

While the US-Chinese trade war will remain a crucial variable in 2020, everyone is hopeful about the future due to the recent mutual steps taken. The expectation rises that in 2020 the impact of trade wars will further diminish and solution will be found. The U.S. had previously brought non-tariff barriers to some Turkish goods, but declining protectionism will open the way for Turkish goods to be traded anywhere in the world.

POSITIVE EXPECTATIONS ON CONSUMPTION SIDE

Throughout 2018 both a tight monetary policy and increased trade tensions focused on growth, and even though the monetary policy began to be eased as of the first quarter of 2019, it was balanced by increasing trade tensions. A mini recovery is expected in early 2020 with an improvement in consumption. An increase in households' income, lower unemployment in developed markets and a moderate increase in wages are sure to follow, according to analysts.

According to Morgan Stanley's 2020 forecast, the global GDP growth rate will rise from 2.9 percent in Q4 2019 to 3.4 percent in Q4 2020. The investment bank pegs next year’s average growth at 3.2 percent with the growth path continuing into 2021. The forecast for global GDP growth in 2021 stands at 3.5 percent. Echoing similar predictions, Goldman Sachs expects a global growth rate of 3.4 percent in 2020. Underlining that a global recession is now much less probable, GS has an optimistic growth prediction due to the positive outlook in the employment market and increasing incomes.

DP World is a leading enabler of global trade and an integral part of the supply chain. The group operates multiple yet related businesses from marine and inland terminals, maritime services, logistics and ancillary services to technology-driven trade solutions.

The infrastructure provided by vessels and ports is one of the indispensable parts of global trade. DP World, which operates more than 127 businesses in 51 countries across six continents, has an important place in developed and emerging markets. With over 56,000 employees, DPW offers a trade-facilitating infrastructure to shipping lines, importers and exporters, communities and other important stakeholders of the global supply chain. 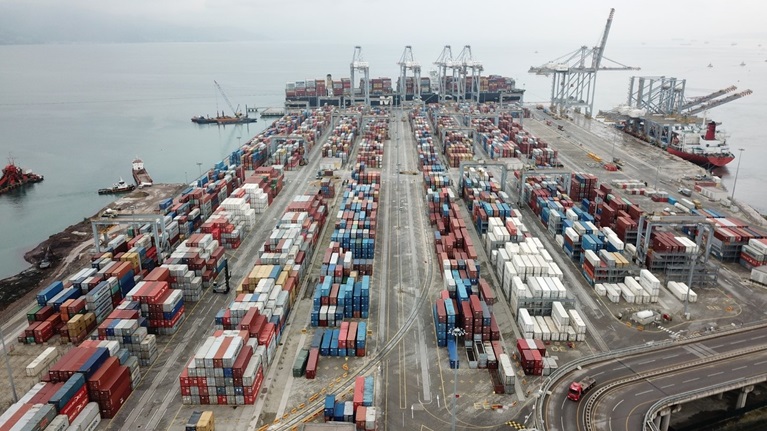