Ports have more advantage for prevention

Ports have more advantage for prevention

Three months have passed since the first case of COVID-19 occurred on December 12, 2019 in Wuhan, China. Then, the outbreak was declared as a pandemic by the World Health Organization on March 11, 2020. Our everyday life, including trade, tourism, food and financial markets, has been affected by this outbreak.

International flights and land routes to and from countries have been stopped. Only maritime transport and logistics have not been stopped and still work. Therefore, sea transportation and terminal connect all countries in the world and continue their operations.

In our country, various measures were taken to minimize the spread of the disease by taking measures such as intercity travel prohibitions, school closures, working from home and partial curfews.

Many precautions have been taken in the workplaces from the areas where people are gathered. Some workplaces stopped production completely, temporarily interrupting their activities, while others took very serious measures to reduce the speed of the epidemic by reducing their capacity or production.

Staff working in positions that can work from home or elsewhere were provided with opportunities to work from home, and the necessary technological infrastructure was provided to staff working from home. Due to operational requirements or working methods, many measures regarding occupational health and safety have been taken by employers for personnel who need to work in the workplace.

WORKERS AT THE TERMINAL ISOLATED

In this period until now, the most important measure to prevent the spread of the epidemic was isolation and protection of social distance. Therefore, until the definitive solution to the disease is found, the most important measures to prevent the spread of the disease in the controlled social life period will be to provide isolation and social distance.

It is considered that the risk of virus transmission during terminal operations is lower than the production facilities. The reason for this is that the majority of the port workers work away from each other and isolated, or work in small groups. Operators work in the cabin of their own vehicle, isolated from other people. Many employees in production facilities have to work in the same area, even if they achieve social distance.

• A “Corona Committee” consisting of our management team was established for the monitoring and control of Covid-19 related issues.

• Employees and contractors were informed about Covid-19. The notifications were made through posters, screens in the terminal, toolbox and email.

• The frequency of cleaning of places where there are many employees at the same time, such as dining halls and locker rooms was increased and disinfectant application was started.

• The cabinets of mobile equipment have been disinfected and disinfectants have been distributed to allow operators to disinfect the cabin daily.

• Hand disinfectants were placed at certain points of the terminal. Personal hand sanitizer was distributed to the staff.

• All personnel services are disinfected monthly and disinfectants are distributed to drivers to disinfect vehicles daily.

• Body temperatures of people were measured at the terminal entrances.

• The following measures were taken in the refectory:

• Tables and chairs were arranged to be 1 meter apart.

• Signs were placed on the floor in order for those waiting in line to line up with a minimum distance of 1 meter.

• Lunch and dinner times were increased. Thus, it was ensured that the staff went to the dining hall in small groups and the distance between the personnel was increased, and the presence of many employees in the dining hall was prevented.

• Only personnel who are in critical position for conducting operations work at the terminal, while the majority of office staff work from home.

• In order to prevent commercial truck drivers from being crowded in the pregate building, the benches inside the building were removed and rearranged.

• The security guards working at the terminal entrances were informed by the doctor about Covid-19 and how they should act in case of any case.

• Meetings, activities and trainings planned to be held inside and outside the terminal were canceled.

• All areas started to be ventilated more.

• Work from home should continue full-time or part-time.

• The number of people in offices where more than one person works together should be reduced as much as possible, the partitions between the work desks / cubics should be increased, and meeting rooms, if any, could be used as an office to provide social distance.

• Working areas and processes should be reorganized to ensure social distance and to have a minimum number of staff.

• The number of people to board vehicles used within the facility should be limited to ensure social distance.

• Dressing rooms should be arranged to provide social distance.

• The seating arrangements in the cafeterias should be arranged in a way to provide social distance, and the food periods should be extended and certain groups should be allowed to eat in half an hour periods.

• Disposable plates, forks and spoons should be used in dining halls.

• Resting areas should be expanded or a certain number of people should be allowed in these areas.

• Manual faucets and electrical switches in all possible areas should be photocelled.

• Additional measures should be taken to ensure that the doors can be opened untouched in all possible areas.

• The number of people who will enter the areas where customers, truck drivers, visitors and customs brokers are located in the ports should be limited in a way to ensure social distance.

• Various technological products were launched to ensure social distance among employees. Suitable ones should be evaluated according to operating conditions.

• Meetings should be held online by teleconferencing methods.

• The number of places that supply tea and coffee should be minimized, disposable cups should be used, water dispensers should be removed, and glasses or bottled water should be used instead.

• People who do not comply with social distance rules should be warned by making frequent inspections.

• The parts of common areas such as door handles and stair rails should be disinfected frequently.

• Working environments should be ventilated more frequently and ventilation filters should be kept clean.

• The mask must be worn during the work. 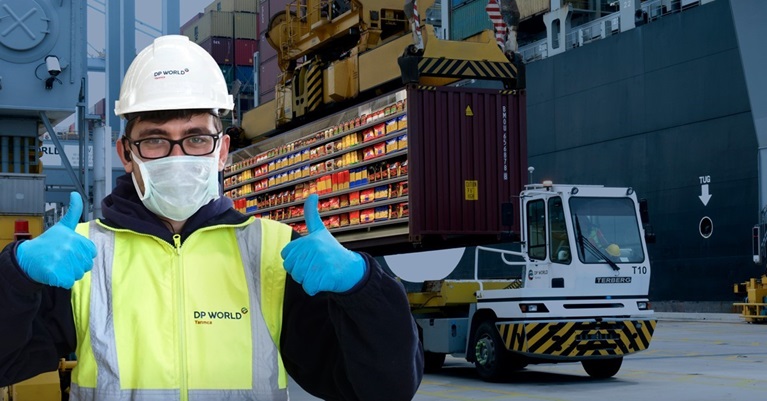