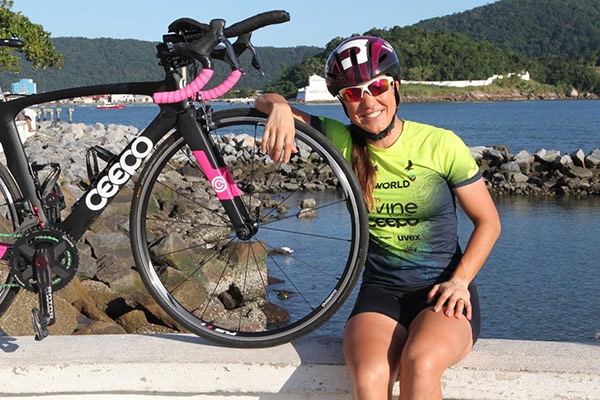 Rosecler Costa, known as “Iron Mother”, represented Brazil in Race Across the West (RAW), in the United States

DP World Santos, one of the largest and most modern private port terminals in the country, located on the left bank of the Port of Santos, believes and invests heavily in sports. Since last year, the company has been sponsoring Rosecler Costa, a 41 years old triathlete, popularly known as “Iron Mother”, who competed in Race Across the West (RAW) in the United States, from June 12th to 15th.

With the purpose to accomplish 1.500 kilometers in three days, she left the city of Oceanside in the State of California, passing through the Arizona desert and ending in the Rocky Mountains of Colorado, where she’s said to be the hardest part of the competition. Rosecler is the only Brazilian woman to participate in the competition.

In her first participation in RAW, her expectation was to finish the race within the time allowed, a mission that she was able to accomplish successfully. During the path, Rose was followed by a car and her support team, attentive to technical stops for physiological needs and sleep, as well as sudden drops in temperature. Their strategy was to stay focused, feeding and moisturizing specially on the bike, to save time.

The sponsorship takes place through the Municipal Program of Fiscal Incentive of Sports Support (Promifae) and DP World Americas had its brand printed on the athlete’s uniform, reinforcing all the terminals of the group in Latin America.

This challenge qualifies participants to compete in Race Across America (RAAM), one of the longest cycling races in the world, with 4.000 kilometers. The two competitions (RAW and RAAM) took place in parallel and the participants pedaled side by side.

Rosecler has been in preparation since January, with daily workouts of up to 11 hours, on the road and indoor, so she could be able to finish this tough competition in the maximum time allowed. In May, for example, she pedaled from Santos to Campos de Jordão (round trip), a route of almost 900 km.

Married and mother of two, Rosecler began in the triathlon when she was 17 years of age, participating in regional and national competitions. At 25, she took a pause her career to dedicate more time to personal life. Almost a decade later, she resumed training focused on endurance competitions (aerobic exercises), where she has achieved more and more prominence.

Her background brings important milestones, such as the three Ironman World Championships in Kona, Hawaii (2015, 2016, 2018). At the IronMan World Championship (2015), she was the first Brazilian to cross the finish line. She was also two-time champion (amateur) of Ironman Brasil, in Fortaleza (2014 and 2015); and Brazilian champion of the Long Distance Triathlon (amateur general) in João Pessoa – PB (2015). She was champion of Ironman Brasil, in Florianópolis (2015) and vice in 2018; South American Ultraman champion and record holder of Ultraman Brasil (2017) in the tests held in Ubatuba and Rio de Janeiro.

DP World Santos was created after the consolidation of the purchase of Embraport by the DP World Group (Dubai Ports World), a process that took place in December 2017. The company is responsible for the operation of one of the largest private port terminals in Brazil, left bank of the Port of Santos (SP). With investments of R$ 2.3 billion, it provides more than 800 direct jobs and 1.500 indirect jobs.

Installed in a strategic area with access by sea, road and rail, the project has 653 meters of dock, 207 thousand square meters of patio and capacity of annual movement of 1.2 million TEUs (unit equivalent to a container of 20 feet) .More information on the portal www.dpworldsantos.com