This year, the terminal recorded the highest female presence, with women occupying administrative and operational functions at the Port of Santos

DP World Santos, one of the largest and most modern private multipurpose terminals in the country, celebrates the increased participation of women in its workforce, a significant achievement for gender equity. The terminal currently has 199 members, almost double the number compared to 2013, when the corporation was inaugurated.

The female presence is distributed in almost all departments of DP World Santos. They perform administrative functions (Finance, Legal, Commercial, Human Resources, Environment, etc.) and 57% are in operational functions - which, traditionally, were mostly occupied by men. Today, about 115 operational functions are occupied by women, who are in charge of functions such as container operators (the largest port equipment, which reaches 42 meters in height), RTG (acronym for Rubber Tyred Gantry, a crane responsible for stacking containers), overhead cranes, small and large forklifts and trucks, as well as warehouse leaders, inspectors, cargo checkers, operations assistants and occupational safety technicians. DP World Santos, in fact, is the only port terminal that has a container operator. The professional was promoted to the position in October last year.

“Our doors are open to insert more and more women in the port sector and contribute to them becoming protagonists of their stories. The company is also committed to improving the statistics when it comes to career development, so that they can go even further,” explains Alcino Therezo, Director of People. Over the last year, 42 women were hired and 25 members who were already working at the terminal had the opportunity to grow within the company thanks to promotions.

The corporation carries out important work aimed at gender equity. The theme “Empowerment of Women” is one of the three main legacy areas that the DP World Group defined in its Sustainability strategy, based on the Sustainable Development Goal 5 (ODS5) of the United Nations (UN). The terminal also has specific initiatives to develop women's careers, such as the global #MentorHer program and Elas na Liderança. In total, the programs have encouraged the journey of 30 members from various areas.

DP World Logistics Subdivision cares for diversity since the beginning

priorities. In this sense, the first leadership of the corporation in the country is female: Thais Perrella is the new head of DP World Logistics Brasil. 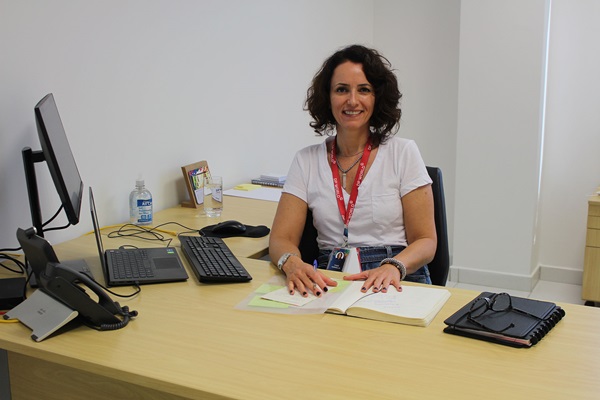 The executive has more than 25 years of experience in the logistics sector, having worked for large companies in the national and international scenario, including nine years living abroad. In 2021, she was one of the participants in the program called Elas na Liderança.

Throughout the Group, there are other members who are making history in the port area. Get to know some of them, such as Fabiana Almeida - the only female container operator at the Port of Santos: Fabiana do Nascimento Almeida has been working for DP World since 2012 and is a container operator. Previously, she operated the RTG for seven years and the overhead crane at the pulp complex of DP World Santos for one year. The member began working at the terminal in the year of its inauguration in 2013, when she was sent to DP World Callao, in Peru, to receive training for the operation of port equipment. She completed her training in Brazil, with the help of a multiplier from Peru and from simulators installed at the terminal itself. DP World Santos was the member's first contact with the port sector, having previously worked in the administrative area of other companies. Cintia Costa arrived at DP World in 2013, ready to face new challenges. Looking for growth opportunities, she decided to leave the company where she worked for three years as Transport Supervisor, leading a team of 60 people, to write a new story in the newly built terminal of DP World Santos. With 15 years of experience in the port sector, she proudly recalls all her path until now. With a degree in Logistics, her interest in the port area came from her family. Her father was a longshoreman and, following his daily routine, Cintia saw an opportunity in this segment. Her first position at DP World Santos was Yard Supervisor, which she held for two years, until she was invited to join the Depot team (empty containers). In June 2020, Cintia also started to supervise the loose cargo warehouse, leading a team of four people. Her performance and focus on the job brought great achievements. In December of the same year, she took over as Depot Operations Coordinator. Hellen Karina de Abreu is Manager of the People Department at DP World Santos and one of those responsible for the increase of women at the terminal. She started at the corporation in 2019 and has a team of 20 members under her management. Karina says that having women who are breaking paradigms at the terminal makes her hopeful that more women will become interested in the professions offered at the Port. She is responsible for the corporation’s Inclusion & Diversity agenda, which includes planning and executing initiatives and programs that contribute to female development and to ensure an increasingly plural and diverse work environment, in all aspects. “I try to encourage my team and the other leaders in the corporation to develop talents, look at people as individuals with different needs, and encourage women to believe that they can and deserve to grow, develop, and assume leadership positions,” she says. Even having formed her professional career within a single corporation, Juliana guarantees that there was no lack of learning on her path, after all, she closely followed the three stages of the terminal’s evolution: its construction; its pre-operations period; and the operational stage, with the constant diversification of services. “I am happy to be part of a corporation that continues to grow and expand its business over time,” she says.

Juliana participated in the first class of women in the MentorHer program, which provided very positive results with the exchange of knowledge and experience with her mentor. In October 2020, she took on her newest challenge: the management of the Legal area. 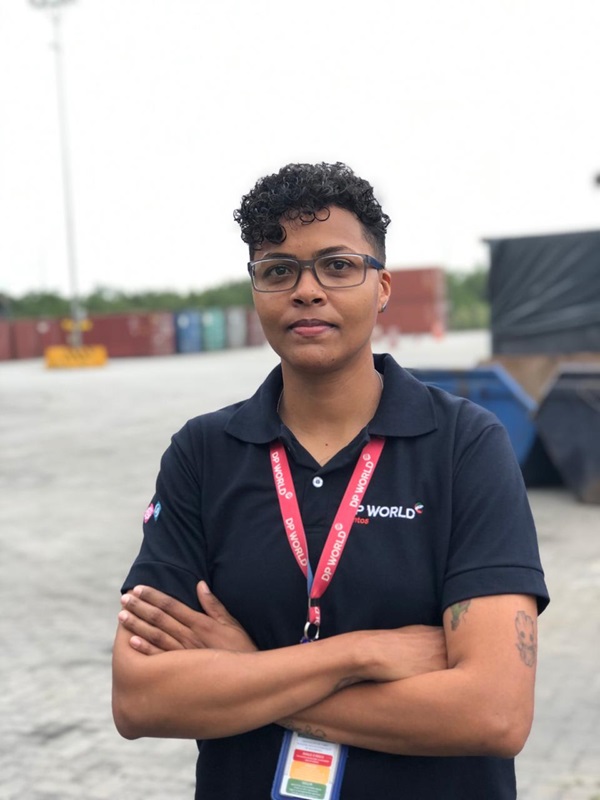 Rita Pavoni de Castro is at DP World since May 2019, but her trajectory as a truck driver goes back a long time. Before joining the terminal, she had been a driver for 12 years. She always liked machines and equipment, and her dream of growing within the port area made her improve herself within the segment over time.

Today, she has courses in Machine Operation, Forklift, Loader, and Crane, besides a Technical Course in Instrumentation and a Specialization in Electrics, Automation, and Basic Mechanics. Rita is very proud to be part of the port sector, and her wish is to continue growing within the Group.