DP World is the third largest operator in container terminal activities in the world.

At the end of 2018, the Serbian Government resolved to begin privatising the Port of Novi Sad. The procedure was completed in May 2019, with the successful bidder being a consortium of P&O Ports FZE managed by DP World from the United Arab Emirates. This consortium became the owner of the Port of Novi Sad. P&O Ports FZE is a specialist company which manages small, multi-purpose ports including container terminals, bulk cargo and general cargo. 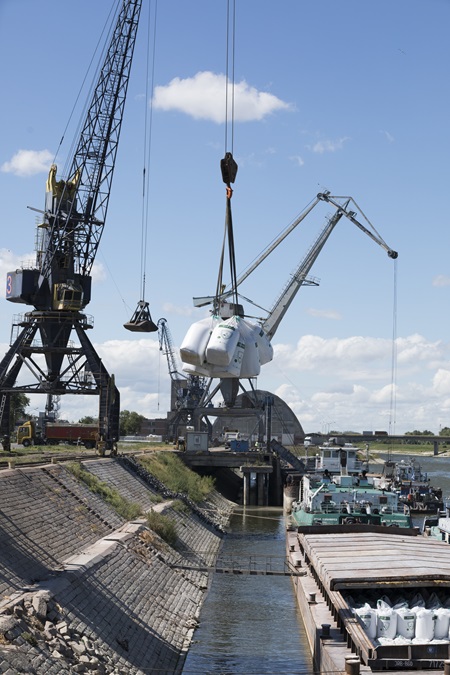 DP World began its development in 1972 as a port operator with the development of Port Rashid in Dubai. Seven years later, Jebel Ali Port was opened, as the highest-turnover port outside Asia. With the takeover of operations in Saudi Arabia, India and Romania during the 1990s the business began to expand and the demands of international trade were included in long-term plans for growth and development.

At the beginning of the 2000s, through the acquisition of partners and crucial strategic investment, DP World began to operate on a global level.

Today, DP World is the third largest operator in container terminal activities in the world, all under the governance of the Government of Dubai. The company manages a geographically diverse trading network which offers our clients an opportunity to access some of the busiest production centres and consumer markets throughout the world.

We’re proud to be part of your supply chain, adapting innovative solutions to new challenges and requirements in order to optimise management and minimise costs.

DP World Novi Sad is in the central part of Vojvodina, the northern province of the Republic of Serbia. It lies within the City of Novi Sad at the 1,254 kilometre point of the left bank of the River Danube. This exceptional location at the intersection of river Corridor VII and land Corridor X makes this a hub for international communications and transport. The strength of the port’s location is not only geographical: it also has excellent transport connections, just 0.3 km away from Rail Corridor X and 3 km away from Road Corridor X. This ensures increased capacity to serve customers for both domestic and international trade and the development of multi modal transport.

Towards the east, there are connections with all international ports on the Danube downstream from Novi Sad: in Bulgaria (Lom, Ruse), Romania (Cernavoda, Braila, Galati, Giurgiu) and Ukraine (Reni, Izmail). The river also connects to ports on the Black Sea and through it to the Mediterranean, Atlantic and Indian oceans.

West on the Danube there are connections with international ports upstream of Novi Sad: in Hungary (Dunaujvaros, Budapest, Komar), Slovakia (Komarno, Bratislava), Austria (Vienna, Linz, Enns), Germany (Deggendorf, Regensburg, Kelheim) and, through the Rhine-Main-Danube Canal, there are river connections with Germany, Switzerland and the Netherlands, towards the Atlantic Ocean and the North Sea respectively.

DP World Novi Sad operates on a water surface area of 6 hectares, with quayside depths of from 4 to 10 metres. The 800-metre quay can accommodate up to 5 vessels in one row of berths. DP World Novi Sad owns and operates 44,000 m2 of closed warehouses and 100,000 m2 of open storage area, consisting of public and bonded warehouses. We can offer storage of both domestic and foreign goods for export and import respectively.

Various historical documents mention trade around the city of Novi Sad before 1748, with vessels berthing on the bank of the Danube in Novi Sad.

The river was used for the transport of various cargo and there is mention of fees to be paid for the use of the river bank.

The Port of Novi Sad was established in 1910. Boatmen would berth on the left bank of the Danube as close as possible to the Novi Sad city lake. Between the two world wars, this was the largest trading port by volume in the former Yugoslavia.

After World War Two, Novi Sad authorities founded the Waterside Transport Company on the right bank of the Danube towards Majur-Petrovaradin. It was registered for waterside transport service, berthing and railway activities, and operations in both bonded and public warehouses.

In July, 1957, the Novi Sad authorities resolved that the company should operate under the new name Pristaništa i skladišta Novi Sad (Novi Sad Port and Warehousing). Two years later the Serbian Government decided to finance the reconstruction of a cargo wharf in Novi Sad on the right bank of the Danube-Tisa-Danube Canal, for which dredging was almost complete. This involved building a new quay between the 0.4 km and 1.2 km points on the stretch between Novi Sad and Savino Selo. This is the current location of DP World Novi Sad.

In 1963, the City authorities in Novi Sad resolved to give land of 45 hectares, 58 are and 61 m3 at the previously determined location on the DTD Canal for permanent use, free of charge, in order to begin construction of a port and warehouse. In order to prepare the land for its intended purpose, about 3 million m3 of sand was used to fill the Port site.

From 1959, Pristaništa i skladišta operated independently for ten years. Major projects accomplished during this period were construction of an operating quay, rail tracks for cranes and three portal cranes with a safe working load of 5 tonnes. The warehouses were not built because of a lack of funds during this period.

In these circumstances, and under the rules of a socialist economy, Pristaništa i skladišta was integrated into the financially more powerful Heroj Pinki. Between 1969 and 1983, the company completed construction of berthing facilities, closed warehouses, roads, rail tracks, and water supply and sewage systems. In 1983, the Novi Sad authorities decided to separate the quay operations and public warehouses from Heroj Pinki with employees in these two areas establishing a new company, Luka Novi Sad (Port of Novi Sad). Since that time the Port has operated as an independent company under the same name. In 1984, the Federal Yugoslav Government declared the Port of Novi Sad an international port.

After the breakup of Yugosavia, and three years of bans on transit through Serbia because of United Nations sanctions, the Port of Novi Sad continued to operate. The river route on the Danube to ports on the Black Sea became the most convenient mode of transport from Serbia during the transition from socialism to an open economy in Serbia and after 2001.