On Monday 11 April, the first parts of the new automatic stacking cranes (Automated Stacking Cranes or ASCs) were delivered to the container terminal of DP World.

On Monday 11 April, the first parts of the new automatic stacking cranes (Automated Stacking Cranes or ASCs) were delivered to the container terminal of DP World. With a month delay, because certain pieces were stuck in the war-ravaged Ukraine. In total, 17 ASC modules will be added in the coming years. They stack containers up to 6 high, whereas straddle carriers can only stack up to 3 high. Antwerp Gateway is the only terminal in the port of Antwerp that works with fully automatic, electrified cranes.

It was feared that the delivery of the crane parts, which come from Ukraine and Poland, would be seriously delayed because of the war. But in the end they crossed the border into Poland only 4 weeks later than planned. The first parts have now arrived by truck at their final destination at the Antwerp terminal of DP World. 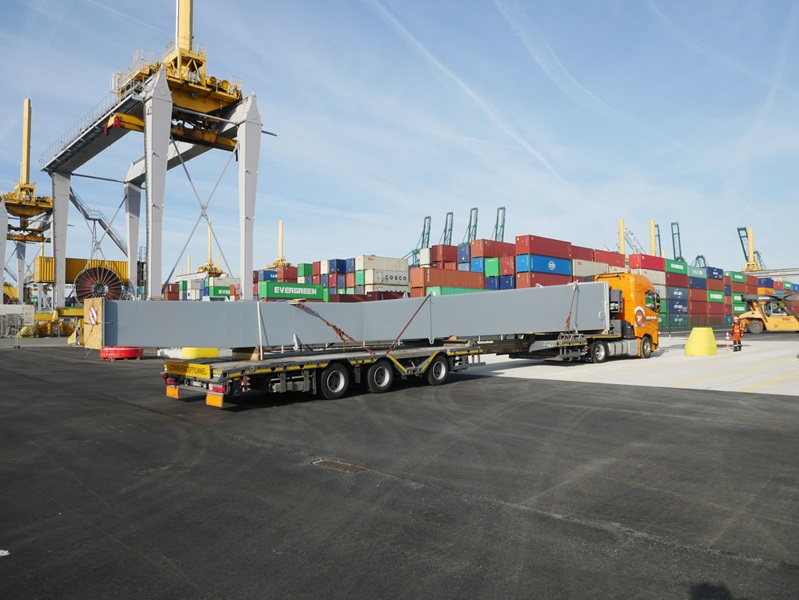 Automated Stacking Cranes (ASCs) are unmanned cranes on rails that store or retrieve containers fully automatically in the stack yards. In Antwerp they will replace the traditional straddle carrier operated stacks, offering a lot of advantages in terms of container capacity and environmental friendliness.

A major advantage is that in this new generation of ASC modules, containers are stacked even higher and closer: up to 6 containers high and up to 9 containers wide instead of 5 and 9 in the earlier modules. This results in a capacity gain of 30 % compared to a traditional straddle carrier yard. The new ASC modules are part of an expansion plan in which DP World invests almost 200 million euros by 2026 to increase the capacity of Antwerp Gateway by a third to 3.4 million TEU.

Dirk Van den Bosch, CEO DP World, “The delivery of the new crane components is the starting point of the retrofitting of our terminal to achieve our maximum density in a CO2-neutral way. With these investments, we continue to play a pioneering role and create clear added value for the port of Antwerp.”

A team from supplier Konecranes and subcontractor Adamans will assemble the parts at the Antwerp Gateway terminal site in the coming weeks, with commissioning scheduled for after the summer. The crane legs from Poland were delivered today. Other pieces such as the bogies from Ukraine and the E-containers with the electronic equipment of the cranes from Finland will be delivered in the coming days. The bogies, or 'rail wheels' in holders, are crucial for mounting the stacking cranes and thus determine the planning. Because they come from a shipyard in Zaporizhzhya in war-ravaged Ukraine, it was feared that the delivery would be seriously delayed. In the end, the parts were able to cross the border fairly smoothly, one month later than planned.

An ASC module consists of 2 cranes, one for handling trucks on the land side, and one for the exchange of containers between straddle carriers and the quay cranes on the water side. In 2005, DP World Antwerp Gateway was a pioneer in the port of Antwerp with 7 modules. More than 10 years later, in 2016, another 3 new modules from Terex were added. In 2026, another 10 years later, a total of 27 modules will be in service.

The automated stacking cranes operate on 100% green electricity, which is largely produced locally at the terminal by means of a wind turbine and a biogas plant. Thanks to the use of this technology Antwerp Gateway has been able to reduce its CO2 emissions per container move by 51% over the past 10 years.

In addition to ASC modules, investments will also be made in the coming years in new equipment such as hybrid straddle carriers, a second rail crane and 4 quay cranes. Other investment areas include digital applications and further automation.